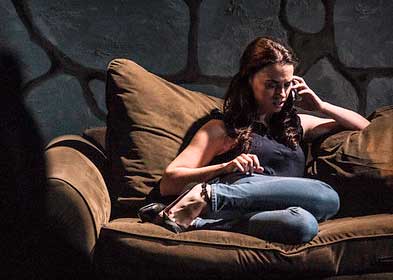 Homenetmen Glendale Ararat Chapter in collaboration with High Gadfly productions took on a substantial undertaking in presenting the story of Adam Noorian, which is based on the book “The Book of Adam” by Hagop Karapens. One of the founding fathers of Ararat organization in Tehran around 70 years ago.

This is a unique achievement for the chapter as a young group of professionals in film and theater have been working on this project for over 2 years and according to many of the audience, the quality of work is impeccable.

Below please watch a video that displays the Realization of this project and read the review of the show written by Aram Kouyoumdjian, which was originally posted in Asbarez news press.

The title of “Yes, Adam Noorian” makes for a clever bilingual pun, since “yes” means “I” in Armenian; however, the production’s boast (in its promotional materials) that it is the “first bilingual play in Armenian and English” is simply erroneous. Several bilingual plays in those two languages have graced Los Angeles stages over the course of at least 25 years. Works by Shahé Mankerian and Rafi Akmakian immediately come to mind, as do Lory Tatoulian’s sketch comedy shows and my very own first play, “Survivors,” staged back in the early 1990s.

“Adam Noorian,” constructed around Hakop Karapents’ novel “The Book of Adam,” is the story of an Armenian immigrant from Iran – a divorced “script doctor” contending with writer’s block, relationship conflicts, and identity issues arising from his hybrid existence in a diasporan setting. Written and directed by Armen Sarvarian for a seven-performance run at the Atwater Village Theatre, the multimedia production blends live scenes, video vignettes, and projections to weave together a complex narrative that is part rumination and part action.

Both creative and bold, the production is unafraid to take risks by engaging in philosophical contemplation, by allowing an unhurried pace and mood, and by venturing beyond the usual confines of genre and storytelling structure – all of which are rare achievements in Armenian theater. But does it pull off this high-wire act? Not entirely. Karapents’ writing is lyrical and lovely – and perhaps better suited for reading than performance; the textual material added by Sarvarian contemporizes the dialogue but occasionally renders it stiff and cliché. “Adam Noorian” consistently opts for indulgent musing, rather than opportunities for dramatic tension, until it verges on pretension.

An extraordinary amount of work has gone into the production, from the filming of the video sequences to the conceptualization of the projections, which include replicas of social media posts. The play’s critique of social media is ironic, given the way it relentlessly publicized itself on Facebook; nevertheless, the production’s level of technical difficulty is high and impressive – but also a liability of sorts, since it comes at the expense of much else.

The scrim on which the projections appear actually separates most of the actors from the audience for virtually the entire play. Coupled with the fact that the production is oppressively underlit, the forbidding scrim makes viewers feel like they are watching the proceedings through gauze. The effect may be intentional (perhaps to imply entrapment), but it is distancing and visually punishing.

Equally punishing is the production’s three-hour running time (including a late start and an intermission). The pace of the play is often glacial and its tone usually ponderous, while humor is rare and, at times, misplaced. Clever elements pepper the script, such as the American Dream imagined as a video game (of material pursuit), but the play typically doles out earnestness rather than biting satire.

Matters are not helped by cast members who substitute brooding for acting, although, in their defense, the way their dour characters are written could have invited this choice. Dro Arzo’s lead performance, is particularly understated and low-energy; indeed, several of the performances are lackluster, although Lorita Meg and Janet Voskanian prove effective in small parts, and Serj Aslanian steals his scenes as Vahik, the show’s sole source of authentic comedy.

Hurtling toward a messy ending, “Adam Noorian” endeavors, with little success, to reconcile elements of meta-theatricality, Zen closure, unexpected tragedy, and – bizarrely enough – random absurdity, all within the span of its final 15 minutes.

Sarvarian is a promising talent, to be sure, whose first foray into theater must be lauded for its daring. His background in film will hopefully inspire far more judicious editing of his future theatrical ventures.

Aram Kouyoumdjian is the winner of Elly Awards for both playwriting (“The Farewells”) and directing (“Three Hotels”). His forthcoming play is “Kabaré.”