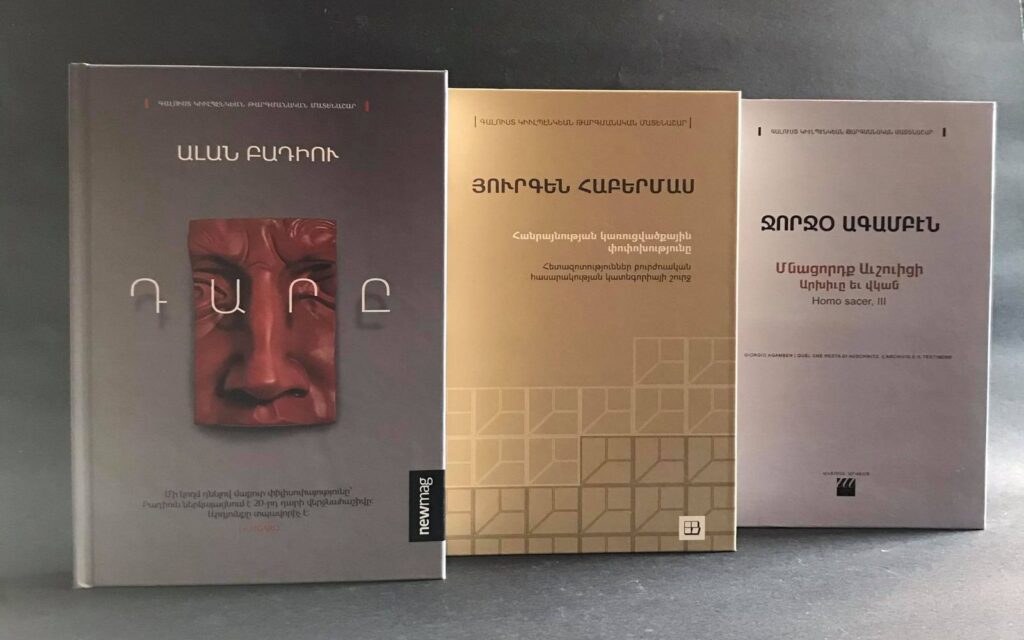 According to Gulbengian foundation, the initial three books of the foundation’s Translation Series have been published in Armenia. The series focuses on translating the most important social sciences and humanities texts into Armenian.

The first book published is Giorgio Agamben’s Remnants of Auschwitz: The Witness and the Archive (Quel che resta di Auschwitz. L’archivio e il testimone), translated into Western Armenian by Marc Nichanian and published by Actual Art. The book, originally issued in 1998, probes the philosophical and ethical questions raised by the testimony literature of the survivors of Auschwitz.

When asked why translating international books is important, Marc Nichanian explained: “translation is necessary for several reasons: first, because we need to get acquainted in the Armenian language with influential books read in the world, especially within academic circles that set trends. Second, because in order to keep a language alive and ensure its vitality, it must interact with the world outside of itself; in a way, it must be ‘measured’ by what is foreign. Lastly, because translation work is very delicate and difficult, it requires the translator to try, test and expand the boundaries of his or her own language. This Translation Series is a good opportunity for the two branches of the Armenian language (the Eastern and Western literary standards) ​​to listen to each other, to meet and read each other.”

The second book is Jürgen Habermas’s The Structural Transformation of the Public Sphere: An Inquiry into a Category of Bourgeois Society (Strukturwandel der Öffentlichkeit. Untersuchungen zu einer Kategorie der bürgerlichen Gesellschaft), translated into Eastern Armenian by Hrachya Stepanyan and published by Ankyunaqar. The book, originally published in 1962, is an important contribution to the modern understanding of democracy. It focuses on the process of the democratization of the public sphere, drawing on the European experience.

Stepanyan talked about some of the difficulties in translating such texts into Armenian: “in the case of the translation of this book,” he explained, “the additional task was to avoid the use of foreign words as much as possible, and to use the Armenian or Armenianized equivalents instead. But this brings with it another problem: the difficulty of understanding texts with a vocabulary that many readers are not familiar with, especially if the sentences have multiple clauses and are complex. As a solution to this problem, I found it effective to include the original foreign word in parentheses next to the Armenian.”

The third book published, by Newmag in Yerevan, is Alain Badiou’s The Century (Le Siècle) translated into Eastern Armenian by Nazenie Gharibyan. It was originally published in French by Éditions du Seuil in 2005. It is a book about politics, philosophy and literature, weaving together approaches and disciplines that are not usually in dialogue with each other. Badiou’s analysis of the 20th century is drawn from his unique encounter with 20th century poetry, theatre and literary theory on the one hand, and the totalitarian realities of the century on the other. Badiou is in search for meaningful narratives that are not confined to the usual approaches based on “logic” or “dialectics.”

“Translation, and especially the translation of world philosophical thought, is the most important strategic impetus for the development of any language and culture, as well as civilization,” highlighted Nazenie Gharibyan. “In this regard,” she added, “the Translation Series undertaken by the Gulbenkian Foundation has created an unprecedented opportunity to fill gaps; it not only provides new and fresh food for thinking in Armenian, but also directly enriches modern Armenian. This in turn expands the creative horizon of thought in all spheres of activity.”

The Calouste Gulbenkian Translation Series aims to reduce the schism between Armenian intellectuals in Armenia and current approaches to the social sciences and humanities in the western world. Within the framework of the Series, ten books of the most influential contemporary academic texts in the 20th and 21st centuries are being published, none of which have previously been translated into Armenian. This project is being implemented in Armenia by the Calouste Gulbenkian Foundation, in close collaboration with the ARI Literature Foundation.

The books can be purchased at all major bookstores in Yerevan, as well as some bookstores in the Diaspora, or by contacting the ARI Literature Foundation.

For more details about the Calouste Gulbenkian Translation Series, consult the explanatory “Foreword” to the Series by Razmik Panossian, the Director of the Armenian Communities Department. 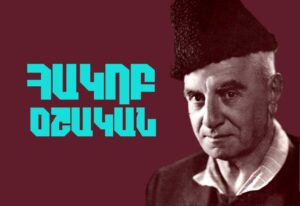 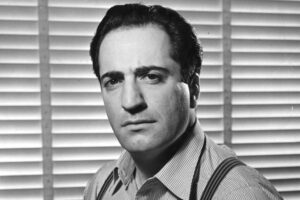