Armenians of LA gathered in downtown Los Angeles Sunday afternoon for a chance to see and hear the Prime Minister of Armenia.

Nikol Pashinyan spoke at Grand Park in his first ever appearance in the city, which is home to the largest Armenian community outside Armenia itself, according to a press release from L.A. Councilmember Paul Krekorian’s office.

All Armenian organizations, Armenian Consul General, and the city of Los Angeles united organized the said event and made Pashinyan’s visit a safe and quality experience. Several public service officials were in attendance, including Mayor Eric Garcetti and Rep. Adam Schiff.

The widely expected visit from a sitting Armenian prime minister generated waves of excitment through the diaspora in Los Angeles, and many updated their social media with stories of the event as they waved their tricolor flags of red, blue and orange to welcome him.

Pashinyan rose to prominence after the 2018 Velvet Revolution in Armenia. Following the changing of the constitution that turned Armenia into a parliamentary system by the then prime minister Serzh Sargisyan, protests sprung up all over Armenia led by Nikol Pashinyan. After 11 days of protests, Sargisyan resigned as prime minister.

Around 5 p.m., the prime minister took to the podium in front of the Los Angeles City Hall building and began his hour-long speech given in Armenian. He spoke about his plans for Armenia since he has taken over as prime minister such as industry, start ups and removing the corrupt system of oligarchs in favor of a more democratic and just system of governance. He also spoke about the diaspora of Armenians around the world and their cultural connections to Armenia, with him saying “it is cool to be Armenian” in English halfway through his speech. “What makes a Armenian,” he said, “is not living in Armenia, but living WITH Armenia.”

As the City Hall reception concluded, political officials, dignitaries and guests descended the City Hall steps for the official program. As host of the rally, Councilmember Krekorian kicked off the program by introducing the many federal, state and local officials who had gathered to welcome Pashinyan to Los Angeles. He also took time to thank all individuals, city and county departments and their leaders for ensuring a safe and successful event.

An exuberant and impatient crowd roared as Pashinyan was called to the stage and with chants of “Nikol, Nikol, Nikol,” welcomed the prime minister, who, in what has become commonplace for him, embraced the cheers and took his place at the podium to deliver what was one of the most important addresses since assuming office.

The more than one-hour speech focused on his impression of what it means to be Armenian and advanced the concept Pan-Armenianism, which included granting every Armenian citizenship to the country.

“I hope that the 10 million Armenians around the world will become, allow me to say so – the promoter of Armenia, because Armenia is the country for all of us and Armenia is our homeland,” Pashinyan said. 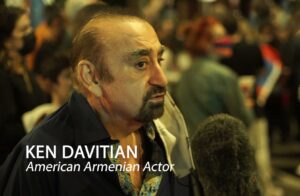